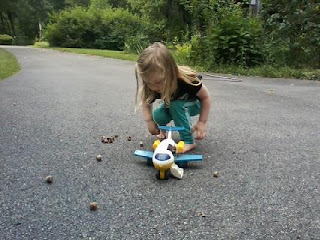 The little one in this photo lives in the Mid-Atlantic. Her cousin, three months older than she is, lives in the West. Fortunately, visits back and forth have been often enough they do know each other well. They met at six and nine months. Even then, Mr. J., the crawler, would get a toy for Ms. A. who was still barely creeping. He could see she had more trouble getting around and often helped her out with what she wanted. They ate in side-by-side chairs with trays and had no trouble sharing their food back and forth, both taking and offering and even feeding each other. I've spent a lot of time with little ones, and that sharing thing is not at all typical of the age. Such a wonderful thing to see. They were best buds from the start.

Of course the bad part of visits is having to leave. Both little ones pout for several days after they're parted and they constantly talk about each other. Thank goodness for modern technology so they can

video chat. Oh, their little faces light up when they see their beloved cousin in real time!

Still, separation is hard for us adults, so you can imagine how these two, who we nicknamed Thing 1 and Thing 2 after a very active cousin visit when they were always in trouble together, feel about not seeing each other often when they don't really understand why they can't or how much distance there is across the U.S.

So yesterday when I had Ms. A. outside playing in the cool, pleasant Mid-Atlantic filtered sunshine, she decided to collect acorns. I suggested we could send some to J since he doesn't have that type of foliage out in the desert where he has to wait until evening to play outside. A promptly got a bucket from the sand box and picked up every acorn she saw and was then ready to give them to J. But, she wanted to give them to him in person. By her 3-yr-old logic, we could just go on an airplane and take them to him. Right then.

A bit of pouting happened when I said we could not just go right now because it was too far, but we could put them in a box and mail them. Being the imaginative little thing she is, A did not leave it at that. She made a new plan.

She took that bucket of acorns back to the porch to find her own airplane and stuffed as many of them as she could inside. I asked if she was sending them on a plane to J. She said, no, she wanted to give them to him herself, using her hands to show the act of handing them over. Then she walked a few steps away, acted like she was picking something up from the driveway, said she had "Little J" in her hand, and put him in the airplane, flew it a few steps, put it down, and opened the door. Then she was off running a short way, her arms wide open, and wrapped her cousin in her arms, pretending he was there with her so she could hand him the acorns.

Yes, that could sound heartbreaking, but in a child's imaginative play, I found a good lesson. She made things the way she wanted them, if only for a moment. The smile was real. The hug was real. The emotions were real. To her, it was real. She remade the story the way it worked for her. No "can't" or "too far" in her story. She simply made it happen. 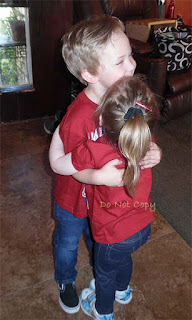 This is the power of imagination, the power of writing your own story. If you can see it in your thoughts, you can make it real. Real is subjective anyway. Why not throw yourself whole-heartedly into what you want and make it happen, even if in your head momentarily? Even better, put it on paper. Write it the way you want it. For that time, it is real.

Who knows what can happen when you start seeing what you want as reality instead of as a pipe dream, or dwelling on why you can't have it? Go ahead. Make it real. After all, we authors do it all the time and it doesn't hurt our actual lives; it enhances them. The human brain is plenty strong enough to accept created reality and still jump back to actuality as needed. Trust me on this. Writing about what you want can make a real, true, actual difference in your life.

Try it. Let me know how it works.